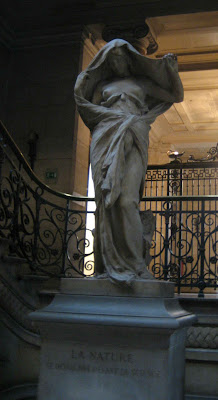 Since I came here in Paris, I have met this Nature statue many times. It is placed in the hall of University of Paris V. On the way to the medical library on the second floor, I passed by in the beginning without realizing this is the famous statue of Nature. If you look round closely, there must be many interesting things around us in this city. The following is the explanation from the site of Musée d'Orsay.

-----------------------------
The statue was commissioned in 1889 to decorate the new medical school in Bordeaux. A young woman, the allegory of nature, is slowly lifting the veils she is wrapped in. When he had finished the first version in white marble for the school, Barrias designed a second statue in polychrome, for the ceremonial staircase of the Conservatoire des Arts et Métiers, in Paris. He used marble and onyx from the newly reopened quarries in Algeria.

Carefully carved to enhance the decorative qualities of the materials, the various parts of the statue play on the veins in the ribboned onyx for the veil, the mottled effect of the red marble for the robe, the preciousness of lapis lazuli for the eyes and malachite for the scarab and coral for the mouth and lips.

The overall effect is surprisingly rich. The work belongs to a major revival of polychrome sculpture launched by archaeological discoveries and illustrated fifty years earlier by Cordier. The statue was very popular and many copies were made.
-------------------------------

For the statue at Musée d'Orsay.
Publié par paul_ailleurs à 21:31