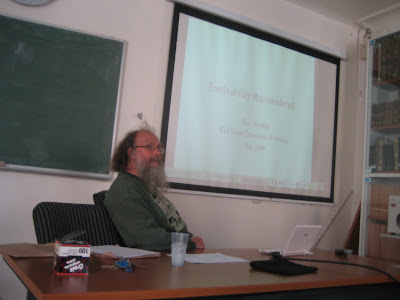 Today I attended a seminar by Prof Kim Sterelny (Australian National University, Camberra, Australia & Victoria University of Wellington, New Zealand). The title of his seminar was "Evolvability reconsidered". Without backgroud in evolutionary biology, it was hard to grasp the problems raised and debated now in the field. On top of that, the terminology used in the talk was different from that used in biology so that I had to translate them into ones found in my vocabulary. Naturally, I was very frustrated.

First of all, what is evolvability? According to Wiki, that is the ability to produce enough advantageous variation to allow adaptive evolution to occur. Prof Sterelny said there is a consensus in the concept of evolvability. What he was trying to do was to pick up the problems in that consensus and to reexamine them. His take-home massage was that lineages (population) evolve but not individuals. The evolutionary plasticity is not a simple reflection of individual traits. In other words, evolvability is not a trait of individual organisms.

There is also an interesting correlation between plasticity and evolvability.

Plasticity is:
+ a precondition of phenotypic complexity
+ an amplifier of genetic change
+ a critical source of selectable novelty

He introduced a hypothesis proposed by Mary Jane West-Eberhard. According to this hypothesis, plasticity indirectly generates variations in the following manner:
+ E changes to E*, in response, P --> P*
+ Initially, P --> P* is mediated by plasticity, but no genetic change.
+ But if change to E* persists, there will be genetic accomodation to P*.

At first sight, I thought phenotypic pressure affects genetic expression and found it hard to swallow. But before evaluating her hypothesis, I'll have to understand the meaning of genetic "accomodation". I am totally open to this theory now.

At the end of his talk, I asked him to leave a take-home message for the people outside of this field, like myself. It is unusual for me to do this kind of things, but I thought I am now in the position to do it. Listening to my request, he first looked a little surprised but tried to explain his thoughts in layman's term, but it was still difficult to follow. After summer vacation, I'll have to return to my memo to see whether some of the words will talk to me in a meaningful way. In any case, today's talk was a stimulating one for two reasons. First of all, I was able to be exposed to a dynamically moving field, and secondly, I could gather informations to be reconsidered in the future. 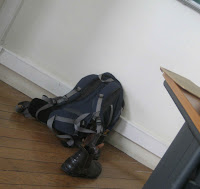