Unexpected meeting with my old friend 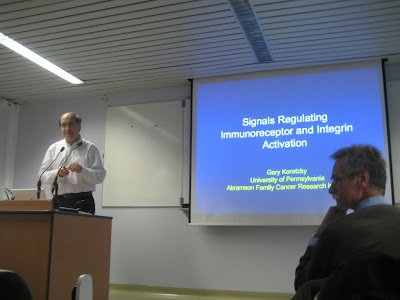 Yesterday I visited Pasteur Institute to attend a seminar. Two days ago, when I waited for the elevator I happened to notice its petit announcement. If the elevator had arrived much sooner, I would never have had this chance. The seminar was given by Dr. Koretzky, one of my old friends. About ten years ago, when he was still in Iowa, we had a collaborative project and exchanged our people a few times. I enjoyed my stay in Iowa and this collaboration. During this experience, I also came to appreciate his generosity and his style of doing science. In the seminar, he talked about his recent findings on the group of molecules called adaptors, that are critical for transmitting informations from outside into the interior of a cell. He is one of the top-runners in this field. From his talk, I had an impression that his final goal is to help sick people by modulating the action of his molecules.

After the seminar, we had a chance to chat after almost 10 years of hiatus. He first asked me how everyting goes in Paris and whether I get homesick. My answers were "Super" and "No". To my response, he said something like, "You are the most UNjapanese Japanese that I've ever met. You know that?" (this may not be the exact expression, though) By the way, I also posted this article in my Japanese blog yesterday. One of the readers left a comment, wondering in what sense Gary said I am one of the most UNjapanese Japanese. Of course I did not ask him why he said that, but many people already noticed this side of my personality. One of the characteristics, as I see it, is being open to outside, i.e. not distiguishing the inside from the outside, which is often not the case in Japanese.

Why I don't get homesick? I have thought about it for some time, and my response for now is the following. It is partly because I have already done something (of course not great) for a reasonbale time in Japan and I don't feel any regrets for it, partly because what I am doing now is something that I have unconsciously longed for, which is not dependent on the place, and, as Gary hinted, probably because the stay in the States in my younger days may have affected me in such a way that I would get real satisfaction only in an occidental environment. The real reasons are hard to know, but it is certain that Gary's two questions made me reflect on many things. 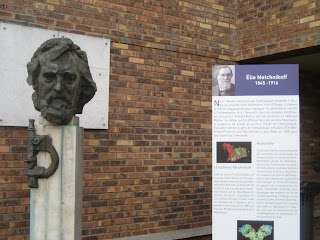