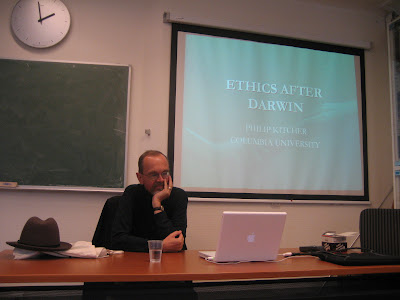 The other day I went to the seminar by Philip Kitcher, John Dewey professor of philosophy at Columbia University. I knew his name from the course of Semestre 1 but never read his papers or books seriously.

The title of his seminar was "Ethics after Darwin". He has been thinking and writing on this topics for the last 20 years. That is because he agrees with John Dewey. He thinks the problems around ethics have to be considered all way through one's life. I happen to think being alive is nothing but philosophizing and keeping asking questions is the key to this life.

First of all, he is opposed to the sociobiology based on the hard-core evolutionism. According to him, the problem of ethics is understood only in the light of history. This thesis can be applied to every aspects of human activities. In any case, he talked about his analysis on the development of ethics in the 50,000 years of "experiments of living" (words of John Stuart Mill). During this process, altruism was born as a way for the group of people to survive. Technologies including means of transportation, collaborative efforts, and a new value of humane living were also developed by the workings of ethics. His approach to the ethics is not like "you should do this or do that under such and such conditions" but the ethics is an object that one should think about throughout his or her life. His attitude toward ethics is to continue to think about the problems by looking through historical glasses. I found his tolerant but tenacious approach very attractive. You can hear some of his thoughts in this interview.