A friend visited from Nagasaki 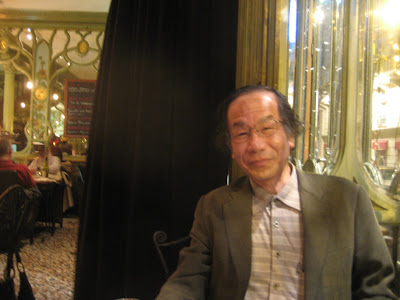 Last night, I received a friend from Nagasaki, Japan. He is professor at the Medical School of Nagasaki University. I did not remember when it all started, but according to him, we first met about 8 years ago at an international symposium held in Fukuoka, Japan. After that first encounter, I invited him to give a talk at the institute where I had worked until last spring.

During our conversation over dinner at a restaurant in the Latin Quarter that started in 1906, I asked him the situation of medical education in Japan, particularly "soft part" including medical history, medical philosophy, and bioethics, for example. To my surprise and of course to my relief, medical history is taught in the course of first year at the university, and bioethics (for example, how to cope with diseased or aged patients) thereafter one lecture per week. But never the principle of medical philosophy that covers fundamental problems such as "what is" disease and health and how we perceive the sate of disease, among others. I think it important to think about these issues from the start of medical education, therefore better implement the course of medical philosophy in the Japanese education system.

I am not only interessed in the history of medicine in Europe but also how medicine has been incorporated in the culture of Japan. Because Nakasaki was the only city open to the world during the "Sakoku", (lock-up of the country) due to the isolation policy of the then-government, and the Nagasaki University has the oldest medical school in Japan (established in November 12, 1857; see below), I asked him the situation of historical data. Unfortunately, because of the location of the medical school, the most part was destroyed during the last war. In any case, in the near future, I would like to visit his university, to talk with people there and to look at the data still left at the university.

Nagasaki University implements its own educational research under the following philosophy.

Nagasaki University makes contribution to well-balanced development of society by cultivating fertile senses in the students and creating science for the world peace, while inheriting the traditional culture in Nagasaki.

In the mid-17th century, the Edo Shogunate of Japan banned for 200 years overseas communications and strictly controlled diplomatic exchange and trading. During this period, however, Nagasaki was the only port where foreign vessels were allowed to enter. Hence, youths from all over Japan traveled long distances and gathered in Nagasaki to learn the world’s latest in science, technology and culture. The whole city of Nagasaki at that time was like a university, where it was a region for learning. We, at Nagasaki University, inherited the "innovative spirit" that evolved from the traditional character of this region, that is, "a region for learning".

Nagasaki is the one place in Japan that has expressed deep involvement in issues regarding the sanctity of life. In the 16th century, Nagasaki was most strongly influenced by Christianity (Catholicism). However, many lives became victims of religious persecution.

Moreover, at 11:02 a.m. on August 9, 1945, Nagasaki experienced terrible devastation from the atomic bombing. The lives of a total of 979 students and employees from schools and colleges (the Nagasaki Medical College and its College of Pharmaceutical Science, Nagasaki College of Economics, Nagasaki Normal School, Nagasaki Youth Normal School) that later merged to form Nagasaki University in 1949 also became victims of this disaster.

We, at Nagasaki University, have embraced a proactive will "to achieve a world where man can coexist in peace" in education and research. In spite of the inhumane negative legacies of religion and science that challenged the respect for the dignity of life, we seek the lessons to be learned from the experience of Nagasaki.

Since the establishment in November 12, 1857 of the "Igaku Denshusho", oldest medical school in Japan, the various organizations that constitute Nagasaki University have been serving the purpose of creating and accumulating "new knowledge" for the last 150 years.

We, at Nagasaki University, will serve to pass on throughout the ages and to peoples of different sense of values the "knowledge" that has been nurtured in Nagasaki. We also hope to contribute to the peaceful development of local and international communities by creating new sciences that will pave the way to a brighter future and nurturing students who love humanity and possess a rich spirit.

(from HP of Nagasaki University)